Short Stories from an Unusual Career: Leo in the United States Army

Leo’s small physical stature made it hard to meet the Army’s weight requirement, but having achieved a perfect score on his entrance exam, Leo’s recruiter still wanted him to enlist. He instructed Leo to eat as many bananas and drink as much water as possible before coming for his weigh-in. It worked, but he continued to struggle to keep his weight up after getting to Germany. The military doctor instructed him to drink beer with his dinner every night. That also worked, and he still drinks a beer with his dinner every day.

Typing Skills Get You a Houseboy

Arriving in Munich as part of the peacekeeping forces after WWII, Leo anxiously awaited his assignment along with all of the other recruits. A Sargent asked if anyone knew how to type, and Leo raised his hand. He quickly became the company clerk. He didn’t have to bunk with all the other recruits, but was assigned his own room on the same floor as the Commanding Officers for ease of access. He was also given a Russian houseboy to attend to his personal needs like cleaning and laundry. Over the next four years, he advanced from an E1 to E6 in rank.

A Streak of Good Luck and a Shave Gets the Girl

After returning from Germany in 1952, Leo was waiting for his next assignment. He expected to hear what everyone else in the room was hearing – Korea. However, he was pleasantly surprised (and booed by the others in the room) when he heard – Florida. He would be recruiting and managing ROTC units in Jacksonville at the Florida Military District Office. One day, a new girl started in the office; Leo took a shine to her and started staying after work to clean her typewriter for her. Sporting his military regulation mustache, he finally got up the courage to ask her on a date – only to have his hopes dashed when she told him, “I don’t date men with mustaches.” The next day he tried again after shaving off his mustache the night before. She accepted. They were married for 58 years and had 4 children together.

An Oops Gets You an Extra Certification

Leo was always looking for advancement opportunities and eventually moved into the Special Weapons field. In this specialty, there were four certifications to choose from, but each person could only have two in total for security reasons. Leo received his second certification after completing his assignment in Killean, Texas. He received orders to report to the Enewetak Atomic Test Shots Program. His family couldn’t go with him, so his wife and children were moved from Killeen back to Jacksonville where other family members lived. Leo reported for duty, but he was told that someone else had volunteered – his slot was taken. He was assigned to Sandia Base in Albuquerque, New Mexico – where his family could be with him. The Army – having already paid to move the family once – refused to move them again, even though it was their mistake that had caused the double move. Leo, not satisfied with the situation, made a complaint with the IG, and they agreed with him. As part of the “do whatever you need to make this guy happy since we messed him up,” Leo requested to be allowed to get a third certification in the Special Weapons field. They allowed it, and that is how he ended up with three of the four possible certifications: Electrical, Command, and Nuclear. It is unknown to the family if anyone other than Leo ever held more than the allowed two certifications!

An Extra Certification Gets You Special Treatment While in Country

Leo arrived in Vietnam in 1968 for his last tour abroad. A review of his records got extra scrutiny, and he was introduced to a rather large serviceman. Leo was told this man would be accompanying him as long as he was in country. After several months of going about his business in logistics with his new acquaintance in tow, Leo finally asked the man just what exactly were the details of his assignment. The gentleman informed him that should they ever cross paths with the enemy, putting them in danger of being captured, he was ordered to shoot Leo. Thank goodness he never had to fulfill his order! The family assumed this had something to do with Leo’s extra certification, but it was never confirmed. 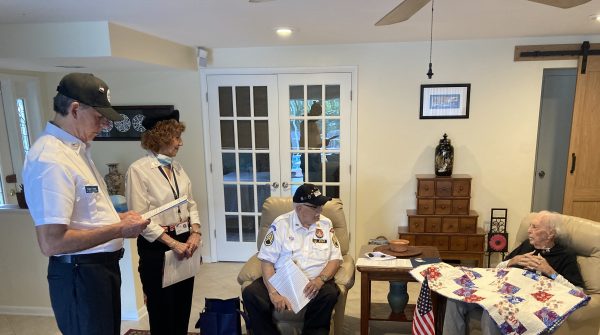 Twenty-Three Years Gets You a Quiet Exit

After returning home from his tour in Vietnam (where he did not get shot by one of his own), Leo was feeling lucky to be alive. Even though his goal was to stay in the Army for 25 years, on his 30-day leave, he decided that he would retire after 23 years. Because he filed the paperwork while he was on leave, he retired without any ceremony. The recognition provided by Hope Honor Guard served as this missing piece from his career.

You can help us recognize veterans just like Leo. Please consider making a gift at MoreHope.org/Veterans so that our Hope Honor Guard can continue this important work!