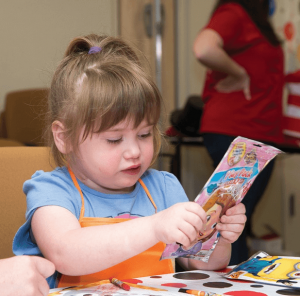 Five-year-old Harley Angevine-Quimby grips her pink and purple microphone and belts out Disney’s “Let It Go,” as loud as her small vocal cords allow. Her short brown hair sways as she performs for her grandparents in their Fort Myers living room.

Like many children her age, Harley is a fanatic of the film “Frozen” and a diehard fan of the Barbie Princess movies. Unlike other 5-year-olds, however, Harley survived three open-heart surgeries before her third birthday.

Harley has hypoplastic left heart syndrome, a congenital birth defect in which the left side of the heart is underdeveloped, making it difficult for oxygen-rich blood to circulate through the body.

The condition has taken a toll on her body. Every day she takes multiple medications through a tube in her stomach and is constantly at the doctor’s office for checkups. Since the condition weakens Harley’s immune system, her grandmother and caretaker, Jeannie Angevine, was worried about illnesses and kept her granddaughter out of public areas for the first few years of her life.

It has been a long road to recovery, but Harley is now getting to join her classmates at preschool and fun events such as a friend’s birthday party. Harley and her grandparents also attended Family Fun Day, hosted by the Junior League of Fort Myers for children in the Hope Kids Care program that supports families like the Angevines.

“Harley and her family participate in one of our Hope Kids Care services called Partners in Care: Together for Kids. This service helps children in Lee, Hendry and Glades counties who have been diagnosed with potentially life-limiting illnesses,” said Samira Beckwith, president and CEO of Hope HealthCare Services. “We help them and their families work through the medical, emotional and spiritual challenges they face each day.”

“I don’t know what I would do without Partners in Care,” Ms. Angevine said.

Along with a complimentary breakfast, the Family Fun Day on Jan. 31 featured crafts and games, a photo booth, goodie bags and pampering stations for the children and caregivers who are supported by Hope Kids Care.

“These are children who are living with significant illnesses, and the caretakers have to change their whole life to take care of these kids,” said Sasha Warren, president of the Junior League of Fort Myers. “It’s not something like, ‘Ok, I am just going to make them some chicken soup and they will feel better tomorrow.’ It really becomes a lifestyle change.”

Harley has lived with her grandparents since she was born. Due to her condition and other surgical complications, she spent the first eight months of her life in the hospital. Ms. Angevine only returned home five or six times while Harley was hospitalized.

Since she spent so much time in a hospital bed, Harley is about a year and a half behind developmentally. She attends weekly physical therapy, occupational therapy and speech therapy to improve her strength and coordination.

Angevine attributes a large portion of Harley’s success to the dedicated Hope Kids Care staff members who have assisted the family since Harley arrived home from the hospital. Through the Hope program, Harley takes piano lessons as a form of music therapy. By learning to play songs such as “Twinkle Twinkle Little Star,” Harley has come out of her shell and is “talking so much now,” said Ms. Angevine.

After discovering Harley’s love for singing and playing the piano, her grandparents are taking the steps to enroll her in a local music academy.

“She is very, very smart,” Ms. Angevine said. “Her mind is not a problem. It’s just catching up. I am lucky to have her. She is my life.”

Story and photo from Florida Weekly