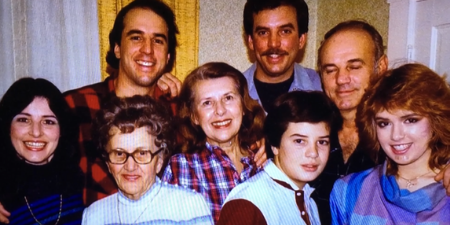 Beloved actor and comedian Kevin Nealon has supported Hope Hospice’s mission for more than two decades – from participating in the 1999 Hope Gulf Walk on Captiva, to appearing at Broadway Palm in Fort Myers for a sold-out stand-up performance in 2018, to competing on ABC’s Family Feud for his charity of choice last year and winning $25,000 for Hope.

Now, Los Angeles-based Nealon enlisted the help of his siblings Kim and Chris Nealon in Fort Myers and Mike Nealon in Atlanta to create a heartfelt video with a two-fold purpose: to share their appreciation for the organization that provided comfort and care for the family’s grandmother, mother and father over the last 20 years, and to encourage others to support Hope Hospice too as part of the “More Hope” campaign.

“I’ve supported Hope for over 20 years because I’ve seen firsthand the comfort and peace Hope provides to people who are seriously ill – and also to their families,” said Kevin Nealon. “I give ‘More Hope’ because Hope’s team truly honors the lives of those in their care.”

Kim Nealon shared, “There comes a time when you have to realize you can’t do it by yourself, and you need help. And so it was Hope Hospice to the rescue.”

Hope Healthcare President and CEO Samira K. Beckwith said it’s important that the Nealon family is sharing their Hope experience with others.

“It really helps other people know that it’s ok to talk about these issues. It also lets people know that everybody needs help, and it’s OK to reach out,” said Beckwith. “But to provide all the compassionate comfort that people in our care deserve, Hope relies on support from our community. We are able to fulfill our mission thanks to amazing donors, like Kevin, who give so generously and share the importance of hospice care.”

The video is available for viewing at https://morehope.org.

“Hope provides the dignity that everyone deserves, so I invite others to give more hope so that everyone in Southwest Florida who needs comfort and care can find that support,” said Kevin Nealon.