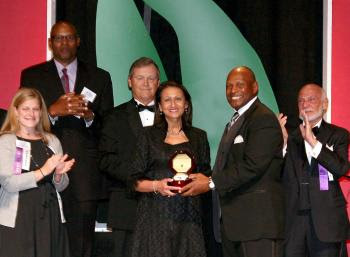 The award is the single highest honor accorded by The Ohio State University Alumni Association and is presented to alumni who have gained national or international distinction as outstanding exponents of a chosen field of profession and have brought extraordinary credit to the university and significant benefit to humankind.

Beckwith, who earned both her bachelor’s and master’s degreess in social work at The Ohio State University, has served as president and CEO of Hope HealthCare Services since 1991. Under nearly two decades of Beckwith’s leadership, Hope has grown from serving fewer than 100 patients a day to more than 2,000 patients in Lee, Charlotte, Collier, Hendry, Glades, Hardee, Highlands and Polk counties. Additionally, Hope has been recognized as a national leader in hospice and palliative care by numerous healthcare organizations.

Previous recipients of the Alumni Medalist Award include William Lowrie (2008), president of Amoco Corp.; Leslie Wexner (1990), president and chairman of The Limited Inc., and Ray Groves (2001), chair and CEO of Ernst and Young (retired).

“To say this is an honor seems an understatement,” Beckwith said. “I’m truly humbled to be included among the members of this prestigious alumni group. Being recognized for my life’s work and my passion for caring for others is extremely fulfilling.”

Archie Griffin, president and CEO of The Ohio State University Alumni Association, said the selection jury – comprised of alumni from around the nation – recommended Beckwith to the Association’s board of directors. “This exceptional recognition is extended by the Association to alumni who have given sustained leadership, their time, and their talent to the university,” Griffin said.

The 2009 Alumni Medalist Award was conferred during the association’s 51st annual awards ceremony on Sept. 25. In addition to being inducted into The Ohio State University College of Social Work Hall of Fame in 2007, Beckwith previously received the APEX Award from the Greater Fort Myers Chamber of Commerce and was named Gulfshore Life Magazine’s Woman of the Year, Survivor of the Year for the Susan G. Komen Race for the Cure and a laureate of Junior Achievement of Lee County’s Business Leadership Hall of Fame.